More than a few of the rock musicians who put San Francisco on the map in the '60s started out strumming along to Kingston Trio albums. Plus, they showed the Beach Boys how to dress. 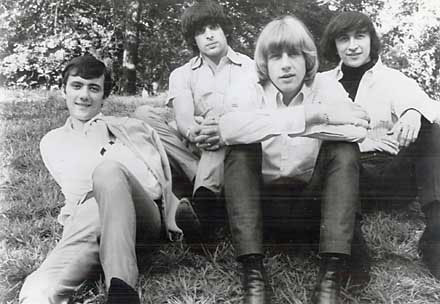 The Beau Brummels revolved around the shadowy tenor of Sal Valentino and the song craft of Ron Elliott. They were the Merseybeat from North Beach. Their latter-era Warner Bros. albums include the minor masterpieces "Bradley's Barn" and "Triangle." But nothing matched the dark bite of the group's Beatles knockoffs produced by a young Sly Stone.

A hard-luck story. Greatest bar band ever on a good night, the Hoodoos couldn't buy a break through three major-label albums. The two bandleaders -- Glenn Walters and Joe Crane -- made the great, undiscovered album on their own label (with help from guitarists Steve Miller, Ronnie Montrose and Link Wray). Clive Davis falls asleep auditioning the band at a Berkeley nightclub. It never happens for the Hoodoos.

54. SPEARHEAD Michael Franti emerged from the breakup of the Disposable Heroes of Hiphoprisy to find acclaim -- and more commercial success -- as the leader of the edgy reggae band Spearhead. "There's a Hole in the Pocket" was an MTV hit that aptly reflected the group's pro-people, antipoverty agenda.

Out of the ashes of the little-remembered Beatnik Beatch arose Jellyfish, a frankly Beatleseque pop group of some magnificence. It landed a big record deal, cut a couple of promising albums and went into the wind. The band's floppy hats quickly looked dated.

Classic David and Goliath: This loony collective boiled down its two decades of found- sound and tape-loop experiments with a brilliant piece of parody, merging U2's "I Still Haven't Found What I'm Looking For" with the foul-mouthed outtakes of "American Top 40" announcer Casey Kasem. It cost them dearly: Island Records sued them almost out of existence and crushed their label, SST. The group still satirizes fearlessly. 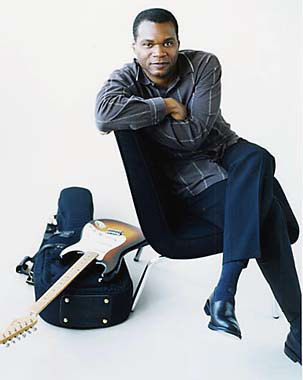 The Portland-based bluesman liked playing in the Bay Area so much he moved here and recruited the house band from Larry Blake's Rathskellar to back him up. San Francisco never sounded so Southern. 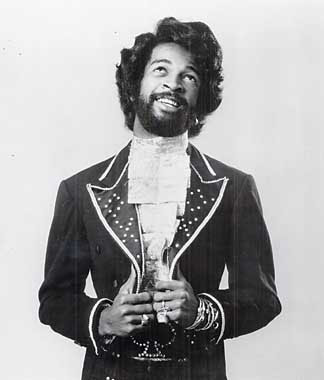 Ooh wee, was this band funky. Bassist and vocalist extraordinaire Larry Graham, fresh out of Sly and the Family Stone, would lead the band onstage and snaking through the audience playing "Can't Turn You Loose" on melodicas, then they would strap on their instruments and start the song for real without missing a beat. And play a 40-minute medley. They don't make 'em like that anymore. 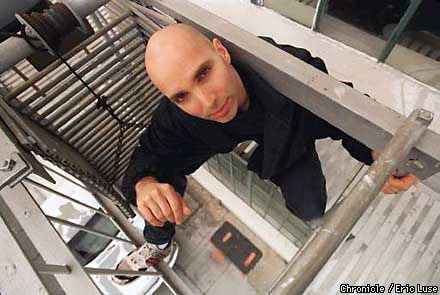 The most respected of the guitar-magazine cover boys, Satriani makes instrumental records that are as tasteful as they are showy. As a teacher, he can claim an impressive list of students including Steve Vai and Metallica's Kirk Hammett.

Boasting intellectually and politically charged rhymes and compelling beats, Paris (Oscar Jackson Jr.) broke out of the Bay Area with 1990's "The Devil Made Me Do It." He didn't have Chuck D's clout, but he may well have been the West Coast's own minister of culture.

The "Basketball Diaries" author came to San Francisco in search of punk rock and alternative literary history, and he fused the two on his debut album, "Catholic Boy": "It's too late/ To fall in love with Sharon Tate . . ." 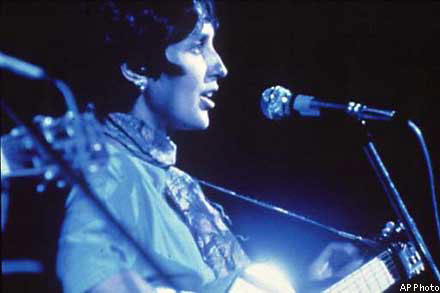 The queen of folk music danced onstage and sang with the Grateful Dead at the Fillmore in the '60s and has a sly twinkle in her eye that is 100 percent rock 'n' roll. Who else would have put a civil-rights anthem on the pop charts?

The group recorded the quintessential hippie anthem while still in New York, but moved to Marin County soon thereafter. Before the solo career of leader Jesse Colin Young descended into banality, this vigorous little band turned out some effective folk-rock inventions, although it never got past the one big hit. 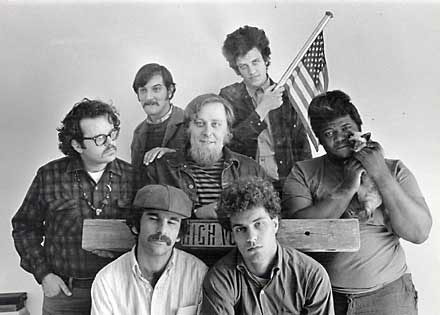 With the incendiary soul belter Jo Baker by his side, the ex-Paul Butterfield Blues Band guitarist ruled the Bay Area club scene when that still mattered. His greatest hit came later ("Fooled Around and Fell in Love"), with future Starship vocalist Mickey Thomas no less. But Bishop's moment had already come and gone. 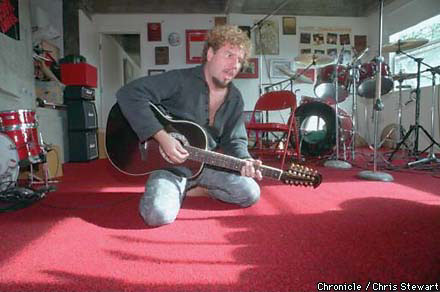 Vulgar, loud and obnoxious, Sammy Hagar was a born rock star. Undoubtedly best known for the 11 years he spent singing with Van Halen, Hagar managed a platinum solo career both before and after his stint with the Dutch boys.

Pedigreed Latin timbales player Sheila E. came to the fore under the tutelage of Prince (when he still called himself that), who wrote, produced, played and sang most of the vocal parts on her breakthrough hit. The sex appeal, however, was all hers. 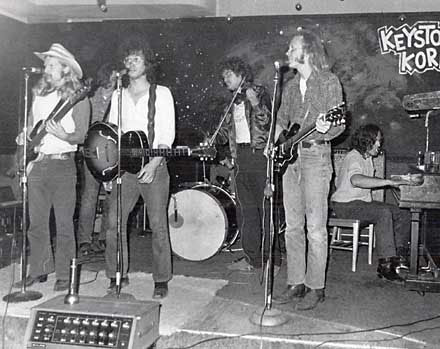 Bringing a blend of barrelhouse C&W and Southern rockabilly to the San Francisco scene, Cody and cohorts were a lovable, oddball bunch -- from goofy Bill Kirchen on guitar to friendly Andy Stein on sax and violin to the cigar-chomping Commander himself. Always underrated, Cody and company opened the door for country and western in the rock underground, and were an obvious inspiration to the whole Austin, Texas, scene. Special mention for the holiday record "Daddy's Drinking Up All Our Christmas." 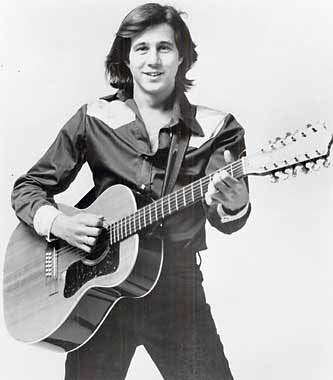 The most commercially successful of the Beserkley Records acts, Kihn scored an early MTV hit, kept out of the No. 1 slot only by Michael Jackson's indomitable "Billie Jean," and slowly dissolved. Guitar whiz Joe Satriani played on his band's final major-label album, Weird Al made a hit Kihn spoof called "I Lost on Jeopardy" and Kihn himself is now a San Jose morning DJ.

Surf music has never sounded so ambitious. Guitarist Jim Thomas -- a real-life regular on the Ocean Beach breakers -- is a compositional savant, creating dreamy, expansive seascapes that have more in common with prog rock and Prokofiev than "Pipeline."

At the height of the local scene's infatuation with loud guitars and paralyzing rock came these Berkeley smarty-pants musicians, barely out of their teens, playing a kind of frothy power pop that simultaneously spoofed and celebrated their bubble-gum roots. Their cover of Tommy James and the Shondells' oldie "I Think We're Alone Now" was a chart hit before Tiffany.

72. DAN HICKS AND THE HOT LICKS

The inimitable, wry Hicks, a drummer for San Francisco rock pioneers the Charlatans, packaged his sly cynicism in a Hot Club de France faux jazz sound (complete with two wonderful female "Lickettes") to showcase the wit and wisdom of one of the great characters of the San Francisco music scene. 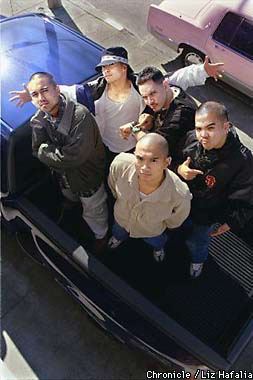 The most influential DJ crew in the world lives in San Francisco when not on tour, which is most of the time. Individually and as a crew, the members of the Piklz have won countless competitions, influenced a generation of aspiring turntablists and put San Francisco's alternative hip-hop scene on the map.

74. COUNT FIVE A pet project of the late rock-critic wild man Lester Bangs -- he called it "the all-time slop- bucket copy of the Yardbirds" -- the Five's sole hit reached No. 5 on the pop chart, appropriately enough. The teenage group reportedly turned down $1 million in bookings to stay in school, ending its brief run at trashy immortality.

Songwriter Ron Nagle had already attracted something of a cult following with his 1970 solo album, "Bad Rice," and clever, witty songs for the Tubes ("Don't Touch Me There"), Pablo Cruise, Barbra Streisand and others when his collaboration with multi-instrumentalist and vocalist Scott Mathews emerged. Way too smart for the mass market, way too pop for the rock underground, the Durocs -- named after a brand of hog -- remain one of San Francisco rock's great anomalies.

On the heels of his 1986 hit by Berkeley's Timex Social Club ("Rumors"), producer Jay King's No. 1 remake of the Bill Withers soul oldie made the song a standard, served as the template for future hip-hop/soul remakes and launched the career of Thomas Foster and Denzil McElroy, the creative brains of Club Nouveau who went on to become the Svengalis behind En Vogue.

77. TRANSLATOR New wave-era Beatles devotees were good enough to draw Crawdaddy founder Paul Williams out of self-imposed rock-critic retirement (when he sang their praises in his book "The Map"). One of the gems of Howie Klein's locally influential 415 label. 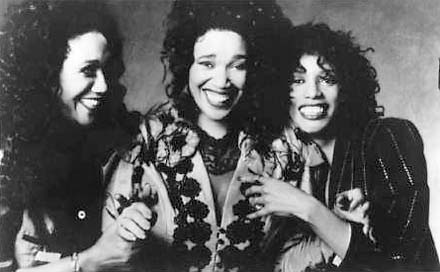 These preacher's daughters from Oakland were background vocalists for Elvin Bishop and born singers. They were wearing thrift- store chic out of necessity when San Francisco producer David Rubinson spun them into gold, long before their chart run of slick hits like "He's So Shy" and "Slow Hand." 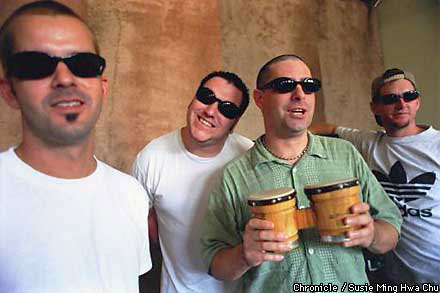 San Jose bar-band veterans latched onto the slap-happy ska-punk sound, then veered into wise-guy astro-pop when their "Walkin' on the Sun" single went huge. Second major-label album, out in '99 and all over TV commercials and movie trailers, proves the group has staying power. 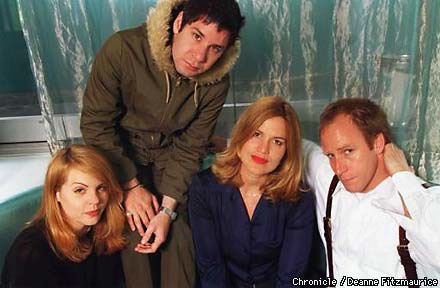 Take two seasoned pros from Faith No More and Sister Double Happiness, blend in two inspired rookies, and the resulting quartet is an exquisite pop confection with an acerbic bite. From their first album, "Seasick," "You're One" gave the band its first MTV- aired single. 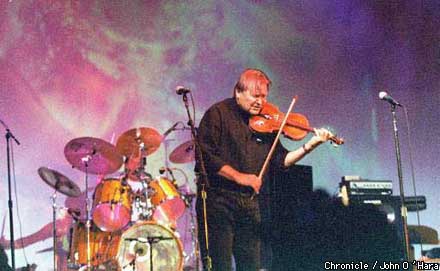 Ethereal hippie rock at its most limpid and transcendental, It's a Beautiful Day flew on the Mediterranean sound of David LaFlamme's violin and the sunny harmonies of LaFlamme and the late Patti Santos. Management problems made the band lifelong litigants and relegated the former Fillmore headliner to footnote status.

83. DISPOSABLE HEROES OF HIPHOPRISY The Disposable Heroes were the act to see in the early '90s. The San Francisco duo of Rono Tse and Michael Franti (formerly of the avant-industrial jazz band the Beatnigs, later of Spearhead) blended multigenre, multicultural messages and mad beats into eclectic and wonderful music.

Definitive Song: "Television: The Drug of the Nation" (1992)

84. COLD BLOOD Pint-size soul belter Lydia Pense mowed 'em down in front of her honking hippie soul band from the last days of the Fillmore. But four albums failed to spread the word.

The best road trip songs of all time

Music events in 2017: Anniversaries, tours, album releases and festivals to look forward to in the New Year

Read Music events in 2017: Anniversaries, tours, album releases and festivals to look forward to in the New Year by The Independent